Lately I’ve been using IPython to do most of my tinkering work. It’s pretty neat, to say the least.

I’ve seen around the Internet people using IPython as a way to blog. I thought that this would be a pretty neat way to go about things, and probably save a large amount of time on editing code-centric blog posts. However, the methods I found were either outdated, outputted HTML (usually with gross CSS conflicts), were hacks for other blogging software, or required a plugin.

Since I use Github Pages (read: Jekyll) to auto-render my blog, I decided to code up my own method. My method outputs files that are in Markdown with a Jekyll front matter pre- filled. This way, I can still add blog posts in the same format as before and edit if needed. No plugins are required this way, too. Sure, it is manual conversion of notebooks, but that’s pretty much the only way to get around the plugin issue and still be able to use Github Pages.

Here are the files you will need to publish a notebook to Jekyll: https://gist. github.com/cscorley/9144544

Everything will output into a folder named notebooks. You can change this by replacing in the config all instances of ‘notebooks’ with whatever you want.

There is one variable in the config named BLOG_DIR that is used to automatically generate the markdown and any support files the notebook needs into this directory. Right now it reads from the environment variable of the same name. You will need to export a $BLOG_DIR environment variable to be able to use this script as-is. This is important because the configuration file jekyll.py will use this variable unless the configuration is changed. If you just want them to plop into the current directory, change it in the config to an empty string.

Finally, you can now run your conversion on a single file with the command: ipython nbconvert --config jekyll.py <FILENAME>.

I did this whole $BLOG_DIR and notebooks mess because Jekyll was pooping out whenever a markdown file appeared in the notebooks folder I was using. I also wanted the notebooks folder so nbconvert would know where to place any support files, and that Jekyll would blindly copy these into the generated site. Plus, a place to put the notebook files themselves so they can be downloaded directly! Nice, yeah?

Here’s a shell function I wrote to convert a notebook file and then move any markdown files created into the _drafts folder.

That’s all. I just do nbconvert FILE now and it just works. Jekyll doesn’t kill itself over it. When I’m done checking that the post is ready to go live, I move it into the _posts folder. No big deal, right?

Below is some example code!

Some code copied from Wikipedia: 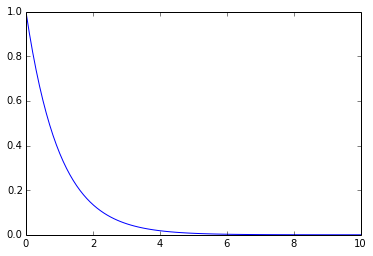